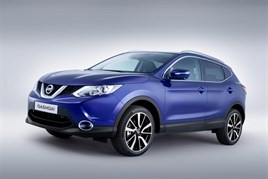 Nissan has revealed the next-generation Qashqai and the new models will arrive in showrooms in February 2014.

The Japanese brand said focus was given to improving interior design, materials and specification to help the new Qashqai compete with premium competitors.

The first generation Qashqai has sold over two million units since its introduction in 2007 and was offered in five and seven seat variants. Nissan has confirmed the new Qashqai will only be available as a five-seat model. The first model was built in Sunderland and a three shift production schedule will continue at the factory for the second generation model.

The new Qashqai is 49mm longer than the current model and slightly lower and wider, with Nissan’s designers going for a sportier crossover look.

There will be a two-mode steering system drivers can choose from that can switch between a normal light feel and sports mode, which offers heavier feedback.

Customers will be able to choose from three engines at launch next year, a 99g/km CO2 108bhp 1.5-litre diesel, which Nissan says is capable of 74.3mpg, a base level 113bhp 1.2-litre petrol and a 128bhp 1.6-litre diesel. All of the engines are mated to a six-speed manual gearbox. There will also be a CVT auto available on the 1.6-litre diesel.

Precise specifications and trim levels will be released nearer to the new Qashqai’s on-sale date in February 2014.