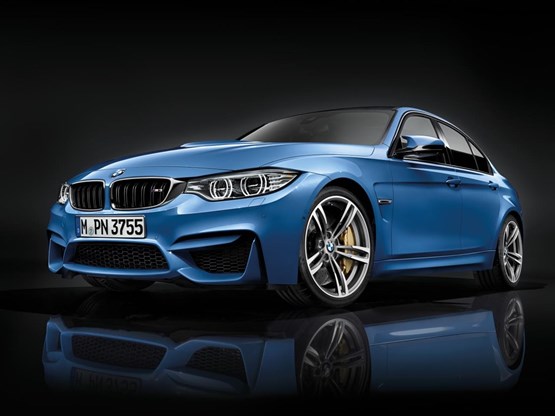 BMW has revealed the first images and details of its new M3 saloon and M4 Coupe ahead of their UK showroom debut in May 2014.

The new M3 saloon and M4 coupe are both lighter, more powerful and more fuel-efficient than the old V8-powered M3 – and BMW claims it’s even sharper to drive.

BMW has gone from offering a naturally aspirated engine, to a twin-turbo straight six in both models, which displaces 2979cc, and develops 425bhp and 406lb ft. While horsepower is only up 11bhp from the old V8 M3, torque has jumped by 111lb ft.

The new M3 and M4 coupe will hit 62mph in 4.1sec (when fitted with the optional seven-speed dual-clutch gearbox) and tops out at a limited 155mph. Add on the M Driver’s pack and the limiter allows a top speed of 174mph.

Track-spec cooling systems for the engine, brakes and differential are standard in the new M3: BMW says it’s worked hard to improve the car’s race circuit performance to cater for track day enthusiasts.

Forged 19in alloys are standard-fit in the UK, along with upgraded M Sport brakes. Lighter, larger carbon-ceramic stoppers with gold calipers will be on the options list.

BMW is including a retuned M Differential on the M3 and M4 Coupe, that BMW claims enhances traction by altering the amount of diff lock between zero and one hundred per cent in a fraction of a second. Customers can specific the paddleshift gearbox to get launch control and a ‘smokey burnout’ function.

Interior features include M-branded footrest and steering wheel, as well as tricolour stitching.