An outdoor ad for Mini UK featuring the car with blurred lines trailing from behind has been banned by the advertising watchdog for its likelihood to encourage dangerous driving.

The ad (pictured) appeared on a poster site beside the A532 road and featured text stating: “The A532. It’s miles more fun in a Mini”. 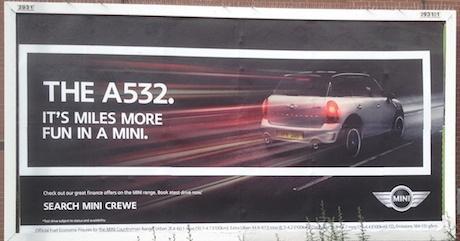 Mini's owner BMW said the use of the coloured lines referred to the distance that could be driven by the car, while the word “fun” referenced Mini’s brand values and how it felt to drive one of its Minis.

The Advertising Standards Authority (ASA) said the large number of lines in different colours would give those who saw the ad the impression of a fast-moving vehicle - an impression exaggerated by the wide format of the poster.

"Because the poster gave the impression that the car was being driven at excessive speed, in a built-up environment, along with the text 'It's miles more fun in a Mini', we concluded it was irresponsible and was likely to encourage dangerous driving." Source: Marketing Week