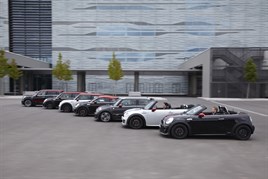 Mini is thinking of creating a high performance sub-brand for its John Cooper Works (JCW) road and competition cars, similar to the M division at parent company BMW.

"It is definitely something we are looking at and we have already started to carry out a few studies," said Mini product and planning manager Dave Tuckett.There are now seven JCW models with the addition of two newcomers.

An eighth will join them later in 2013 following the launch of the Paceman, a coupé-bodied version of Mini's largest model, the Countryman.

The two newcomers are the Countryman JCW and an extreme version of the Mini Hatch, badged the JCW GP. Both are powered by a new 215bhp version of Mini's 1.6-litre turbocharged engine.

JCW models make up only around 3 per cent of MINI sales, but they are growing at a rapid rate and have an important halo effect on the rest of the range. Total MINI sales topped 300,000 for the first time in 2012 and are set to increase further in 2013 with the addition of the Paceman.

The £28,595 high-performance Countryman is the first four-wheel-drive JCW model. The £28,790 GP is even more extensively modified, including the removal of the rear bench seat. It has motorsport-derived suspension, brakes and aerodynamics, an electronic differential lock and a special GP mode in its stability control system.

Only 2,000 will be made, with the UK, America and Germany - the biggest markets for JCW Minis - taking the bulk of production.