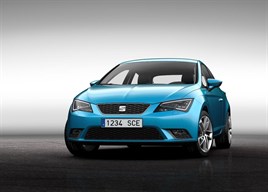 Seat’s Leon SC will debut at the Geneva Motor Show next month and it will be the first time the Spanish brand has had a three-door version available of its C-segment hatch.

The Leon SC's wheelbase is 35mm shorter than a regular Leon, and the entire car's length has been cut by 100mm.

Alejandro Mesonero-Romanos, head of Seat design, said: “We have given the three-door Leon SC a highly distinctive character – just deleting two doors would not have been enough for us.

“That is why we opted for the shorter wheelbase – although it is only 35 millimetres, the visual effect is very powerful. The result is a big difference in the expression of dynamics.”

Five- or six-speed manual gearboxes are standard depending on the engine choice, with six- or seven-speed twin-clutch automatics as an optional extra.

Prices are yet to be confirmed but expected to start below £15,000 when the Leon SC goes on sale in the UK in June. A Leon ST estate model will follow in December.