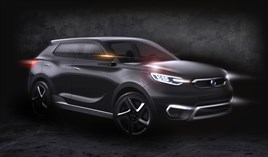 SsangYong has previewed what could be its next crossover SUV ahead of the Geneva Motor Show next month.

The SIV-1 concept (smart interface vehicle) has only shown a concept sketch so far, but promises that it defines the brand’s new design philosophy as well as its intentions to launch a “mid-premium” crossover.

The Korean band has been building its representation in the UK with a network of over 60 sites.