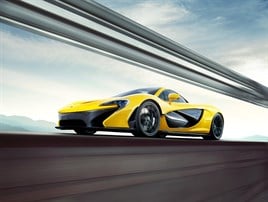 McLaren’s P1 hybrid supercar will be priced from £866,000 when it goes on sale in March across the world.

Production is limited to 375 units to “maintain exclusivity”.

The P1 is powered by a mid-mounted 3.8-litre twin-turbo V8 petrol and electric motor to give a combined output 903bhp. This power combination gives the P1 a 0-62mph time of under three seconds and the car will go on to an electronically limited top speed of 218mph. The combined powertrain kicks out 200g/km CO2.

McLaren says it has kept the styling of the P1 very close to the original concept which was shown at the Paris Motor Show engaging with potential customers to gain their opinions on design.

The brand believes the P1 will be the first car to truly deliver an F1 experience on the road with an automatically deployed rear-mounted wing and two flaps ahead of the front wheels which can increase downforce to 600kg when driven at speed.

The P1 can be driven in electric mode at speeds of up to 30mph with a short range of 12 miles.

The P1 will be on sale at three dealerships in the UK through Sytner in Manchester, Rybrook in Birmingham and Jardine Motors in London.