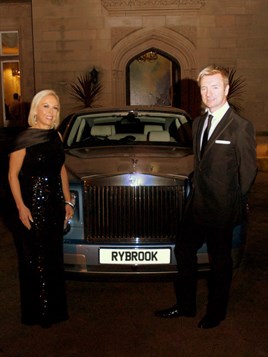 Luxury car specialist Rybrook has risen over £20,000 for Marie Curie Cancer Care after holding an event with Torvill and Dean at Hampton Manor near Birmingham.

The evening was put together by Rybrook’s Rolls-Royce Birmingham dealership and forms part of a 12 month support campaign by the dealer group’s 2013 chosen charity.

The evening featured a Q&A session with the former Olympic medallists and a charity auction which rose over £20,000 in total. The prize of a Rolls-Royce chauffeur experience to Mama Mia! in the West End contributed £2,000 to the overall total.

Giles Rowley, Rolls-Royce Birmingham dealer principal, said: “Rolls-Royce Motor Cars Birmingham will be supporting Marie Curie Cancer Care as its chosen charity for 2013 and we are working closely with the fundraising team for the Marie Curie Hospice, West Midlands.”

The money raised from an Evening with Torvill and Dean will help the Marie Curie Hospice in Solihull to refurbish their family room to support the families of those with terminal cancer and other terminal illnesses in the hospice.