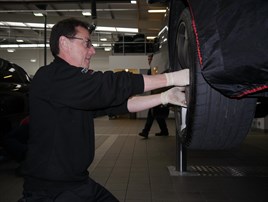 Thomas had offered his services for a full working day to whichever retailer in the Volkswagen Group made the highest bid. A pledge of £20,000 saw Inchcape-owned Swindon Audi win the auction.

After donning his workshop outfit, Thomas started his day with a pre-delivery inspection (PDI) on an S8, under the watchful eye of Swindon Audi technician Adrian Vines.

He then went on to record a video-based inspection of an owner’s car using the brand’s Audi cam technology. Thomas then embarked on a stint in the aftersales department, where he was tasked with handling customer calls, before returning again to the service bays for more work.

Thomas began his career in the motor industry with a four-year apprenticeship in automotive workshops.

“I was an apprentice from 1976 to 1980 and then served as a qualified technician for a further five years before moving over to the manufacturer side.

“The technology I’ve been dealing with today is light years ahead of what I worked with back then, so I've learnt a lot and thoroughly enjoyed the whole day. It's great that this 'back to the floor' idea ended up raising a significant amount of money for Comic Relief.”

The donation made by the Inchcape Group – owner of Swindon Audi – will be matched by Volkswagen Group United Kingdom, taking the total contribution to £40,000.