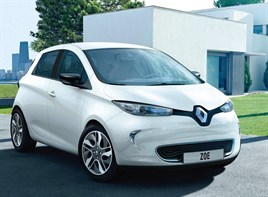 In the run up to the launch of the all-electric Zoe, Renault is offering a free domestic charging point with each new sale.

Describing it as a ‘ground-breaking offer’, Renault says the scheme brings the Zoe’s on-the-road price (£13,650 to £14,750 depending on trim level) down to that of an equivalent diesel supermini.

The offer makes the most of the 75% support on domestic Wall-box installations announced as part of the government’s £37m funding to increase take up of electric vehicles.

Andy Heiron, head of Renault UK’s electric vehicle programme, said: “We’ve been delighted with the level of interest the British public have already shown in Zoe.

“Adding a free Wall-box to its chic styling and tempting pricing now makes it an even more irresistible proposition.”