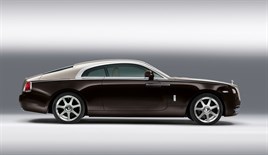 Rolls-Royce has broken sales records in the past two years but it will not be able to continue growing once capacity is reached at its factory at Goodwood.

Chief executive Torsten Müller-Ötvös said: "We made more than 3,500 cars last year but eventually we will be restricted in terms of expansion because the factory is in a conservation area. There are no plans to open another plant in the UK so ultimately volume will be determined by the size of the plant. There is no chance that we will build the cars anywhere else because it is not what our customers expect."

Müller-Ötvös took up his role at the head of Rolls-Royce in April 2010 and admitted that is has been quite a challenge being the custodian of a brand that has become a generic term for quality and luxury. The best of almost anything is referred to as being "the Rolls-Royce".

He said: "Our customers are very demanding, they nearly always want to add their own touches and every one of the Phantoms we build is bespoke as are 70% of Ghosts. We expect the same from the new Wraith."

Müller-Ötvös has been with parent group BMW since 1988 and said he had found things very different at Rolls-Royce. "We are not really a car business. Our owners generally have several cars so we are in the high-end luxury business competing for sales against yachts and jets. While entry to the brand is around £200,000, spending over a million on one of our cars is not expensive to our customers."

The added expense comes from the bespoke, hand-made craftsmanship that goes into the cars at Goodwood. Each car takes 450-500 hours to make and with bespoke work this can grow to a staggering 800 hours.

Keeping the customers happy is also a challenge as personal service is expected. Müller-Ötvös said: "If any request cannot be dealt with by a dealer we have a team of three ‘flying doctors' based at Goodwood, ready to go anywhere in the world.

"Although they are based at the factory they spend a lot of their time on aeroplanes. We have requests, for example, for additional coachwork or upholstery which has to be done by hand and by an expert."

Finding people with the ability for fine craftsmanship is becoming increasingly difficult. He added: "When we first started at Goodwood we were lucky that we were able to call on some very talented people who had been involved in boat and yacht-building or furniture making but these are becoming harder to find. Whoever we take on spends a minimum three months training before they can touch one of our cars. We do offer apprenticeships and we currently have 40 at the factory."

Hybrid power trains are on the agenda although Müller-Ötvös pointed out the Roll-Royce does have best-in segment emissions, a segment in which he includes the likes of Ferrari, Bentley and Lamborghini.

"We have to be mindful of legal and emissions requirements around the world, particularly in China which is now our biggest market, and where the rules are getting tougher all the time.

"A plug-in hybrid would be a sensible solution but once again, whatever we do with powertrains, there can be no compromise - the customers simply would not accept it."