Doing a Dacia is much harder than it sounds 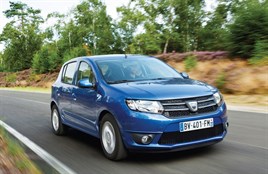 It’s often said that car buyers are downsizing – the heart of the UK car market has come down from upper medium cars (e.g. Mondeo) to lower medium (e.g. Golf) in a generation.

However, that is not really true. Cars in each segment have grown, while the buyers have stayed the same – they buy the same sized cars, which now happen to be classified differently.

Is the same thing starting to happen to brands?

As well-known brands try to move upmarket, is a bigger space opening up for entry-level brands to come in underneath?

The thought is prompted by the open secret that VW is considering creating a new low cost brand. On the face of it, this seems bizarre.

However, Skoda, in particular, has steadily marched into the mainstream.

The example of a new entry-level brand that has got the car industry scratching its collective head is Dacia.

New in the UK, but hugely successful in other markets since 2004, Dacia seems to be the automotive equivalent of the perpetual motion machine.

Thought to be simultaneously the most reliable, the most profitable and the cheapest cars in the Renault range, Dacias combine attributes that should be mutually exclusive.

It is no surprise that everyone else wants to “do a Dacia”, including Renault’s alliance partner Nissan, which is recreating the Datsun brand.

While anyone can create a low-cost brand, the question is whether everyone can make a success of it.

One of the crucial aspects of all Dacia models is that they are based around the size of the original Logan – the Sandero is a bit smaller and the Duster is a bit bigger, but the centre of gravity is clear.

The reason for this is simple.

True economy cars have to be family sized. Middle aged people on a budget (who make up the vast majority of the target buyers) cannot possibly afford to buy an economy city car, because they would need another car as well.

At least in the west, that is a limitation on the potential size of the market.

Therefore how many economy brands can one part of the market support?

It could be argued that different rules apply in emerging markets, where people are going to be a lot less bothered by something less spacious and powerful than a Dacia.

Possibly, but the cautionary tale of the Tata Nano suggests the rules may not be quite so different.

The Nano was a brilliant idea for motorising Indians with a four wheeler that cost from £2,000.

However, disappointing sales suggest that buyers expect anything with four wheels to feel like a real car.

The other problem with economy cars is keeping the design and production costs down.

Renault did a brilliant job of raiding the parts bin to create the Dacia range, but it is very hard to stop engineers, well, engineering.

They want to improve the suspension, and tweak the steering, and it takes an iron will to stop them.

Renault’s “just say no” approach is very much the exception.

Plenty of other companies have tried to create economy cars, such as the emerging market Fiat Palio.

Fiat’s efforts to make a global design by involving teams in Europe and South America led to a car that had no significant cost advantage.

Even assuming that a car company can design a genuinely low-cost brand and there is a space in the market for it, there is one final problem – what happens to the core brand?

It is all very well to say that the core brand will be pushed upmarket, but that is very, very hard to achieve...

Car buyers will benefit from new rivals to Dacia.

However, at least in Europe, it seems unlikely that anyone else could have the same impact.

There is only a certain amount of oxygen in that market, and Dacia has already absorbed a great deal of it.