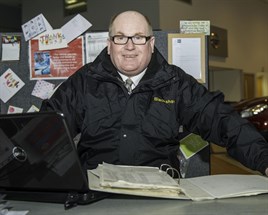 Ronnie Black, a part-time sales executive at Blackshaws Nissan in Alnwick, has clocked up 10,000 sales at the dealership n between working as an ambulance driver and paramedic over a 29 year period.

Black now works full time at Blackshaws after retiring as a paramedic and is approaching his 30th year of service at the dealership.

Black said: "I've thoroughly enjoyed both my careers and I wouldn't have wanted to miss out on either. They've both been really rewarding in different ways.

"I've always liked working hard and when I was working shifts on the ambulance, I'd get home and everyone else would be at work. I couldn't face just sitting at home doing nothing so I decided to get another job.

"To begin with I never intended to be doing it for so long but I've had great fun along the way and so I've just kept going."

Over his career Black’s job as a paramedic has crossed over with his role as a car salesman. He has sold a car to a young woman he delivered as a baby and also sold a car to a man whose life he saved following a traffic accident.

Black said: "Being born and bred in Alnwick meant I knew a lot of people round here anyway and then working on the ambulance for nearly 30 years meant I got to know a lot of others.

"When people know you and trust you they come to see you first when they need a new car and, if you're polite, friendly and never pushy not only will they buy from you but they'll keep coming back.

"It also helps that Blackshaws has been established for nearly 100 years and has a great name around here."

He has records for every car sold since 1988 (the first five years of records have been lost). His best month ever was March 2012, during which he sold 63 cars. 2012 was also his best ever year with a total of 408 sales.

Black added: "My records are a big part of selling cars for me. I can see when someone's car's a certain age or coming to the end of a finance deal and I can give them a call about taking another one.

"A few years ago I transferred most of them onto computer to make my life easier but I threw away those from my first five years as I didn't think there was any point keeping records that went that far back. All I can remember is that there was more than 2,000 cars in there."