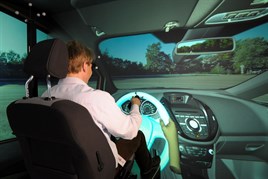 Ford is using augmented reality to help it increase the speed with which is can develop new prototypes without having to real-world vehicles.

Ford’s 3D CAVE allows the brand to test and refine thousands of details of new car designs from the size and position of a cup-holder to rear-window visibility.

Michael Wolf, virtual reality supervisor, Ford of Europe, said: “We can now conjure up a car in the digital world, and then actually get in and experience it.

“We still rely on the know-how and imagination of our prototype engineers to bring designs accurately to life, but now they have at their disposal a much more sophisticated tool to do so.”

Engineers using the 3-D CAVE in Cologne, Germany, sit in a dummy car interior as vehicle 3-D simulations are projected onto the ceiling and three surrounding walls. Wearing special polarising glasses and monitored by a motion-detecting infra-red system, they interact with the virtual vehicle by, for example, determining the reach to rear view mirrors or to place bottles into door pockets.

The CAVE uses an animated external environment with pedestrians and cyclists to help engineers assess visibility of the outside world from inside the car. It also enables engineers to access and compare multiple designs – including vehicle interiors produced by other manufacturers.

Ford’s CAVE in Cologne is supported by an identical set-up in Dearborn, U.S., and further single-wall facilities make it easier to move prototypes around the world.

Engineers used the CAVE to identify the potential of the new B-Max’s rear door system, which offers hinged front doors and sliding rear doors that integrate the central body pillars to provide unrivalled access for passengers and luggage.

Ford is now investigating incorporating controls that operate the in-car entertainment system, open and close windows, and provide advanced driving simulations. Real-time global illumination scenarios could allow engineers to analyse how interior lighting and reflections change through the course of the day and according to changing weather conditions.

Wolf said: “The CAVE makes it so much quicker and easier to analyse designs.

“For example, to manufacture three different front pillar design examples and fit them to a prototype vehicle could take 10 days. The same project could be completed in just one or two days using our virtual reality simulator – and also saves physical resources.”