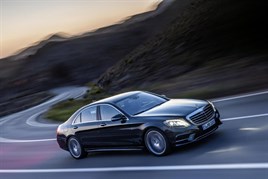 Mercedes-Benz has revealed new details and images of its new S-Class flagship model ahead of going on sale in the UK in time for the September plate-change.

Not only will the new model replace the previous S-Class but it will also look to replace Mercedes' Maybach ranges, particularly with the long-wheel base version which will be popular in Asia.

All models will feature LED lights and interior space has been increased for the driver and rear passengers.

The seats in the back can be configured in two ways with a three seat bench or two chairs in the standard model and more configurations available in the long-wheel base version. All seats are heated, cooled and feature massage settings.

UK customers will be able to choose from a 3.0-litre V6 diesel with 254bhp, 2.1-litre four-cylinder diesel hybrid with 204bhp in combination with a 20kW electric motor for a total output of 228bhp and an upgraded 4.7-litre V8 petrol with 449bhp. A plug-in hybrid version of the S-Class is planned for 2015. There will also be a S63 AMG version.

A stand out feature on the new S-Class will be its adaptable damping system called Magic Ride. The technology uses a camera to scan the road for imperfections and adjust the car’s damping rates to make the ride more comfortable. The S-Class will also drop by 20mm at speeds over 75mph for better aerodynamics.

Infotainment tech includes the ability for text messages or emails to be read out through the sound system. New safety technology includes emergency breaking, pedestrian detection, air-bag equipped seat-belts and a steering assist system which will guide the car in motorway lanes in combination with adaptive cruise control.

Other features include the ability to bring the S-class to halt if needed, and maintain pace with traffic in a stop-start jam without intervention from the driver.

UK pricing has yet to be announced.