Citroen Vans in 12 month sponsorship deal with the Discovery Network 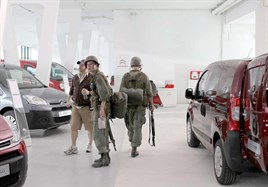 Citroen Vans will be sponsoring Discovery Networks UK’s documentaries in a 12 month deal from May 31.

The campaign will see Citroën Vans sponsor over 235 hours of programming per month on the Discovery Channel; Discovery Science and Discovery History.

There will be 80 second indents on the Nemo, Berlingo, Dispath and Relay each hour as openers, closers and break bumpers across the documentaries shown on the channel.

Citroën Vans will gain a high level of on-air visibility for the Nemo, Berlingo, Dispatch and Relay - with 80 seconds of idents shown per hour as openers, closers and break bumpers across Discovery’s documentary portfolio.

The campaign includes a co-branded microsite, three competitions promoted both on air and on Discovery’s social feeds, as well as promotion in Discovery’s newsletters.

In addition, Citroën commercial vehicle test drives will be offered from Discovery’s digital hub, which will also promote the viewer competitions.

“With this latest campaign we have adopted an innovative creative route, using characters that might be found in documentaries, taking them out of their natural environment and putting them into a Citroën showroom.

“These characters then explore the features and benefits of Citroën van models in a way that will catch the imagination of potential buyers.”