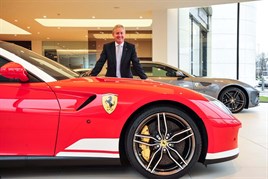 JCT600 also made strategic property investments of £3.8m during the year.

JCT600 group chief executive John Tordoff  said: “While 2012 has seen on-going economic uncertainty, we have continued to weather the storm.

“We expect the improved customer confidence we’ve seen over the last year to continue and already we’ve experienced a strong start to the year with new and used car sales ahead of the market as they were last year.

“Although competition remains strong, our continual investment in people, facilities and systems enables us to lead the way in implementing new industry-leading initiatives which keep the customer at the centre of our business.”

The group is expecting a significant increase in turnover over the next year following the acquisition of the share capital of Gilder Group in February 2013 for an eight figure sum.

Tordoff said: “The recent acquisition of nine additional dealerships in South Yorkshire, Derbyshire and Nottinghamshire will support our continued growth, adding over 30% to our revenues and strengthening our geographic reach.

“It also grows our team by a third and continuing to invest in on going staff training and development will remain a key focus.”

JCT600 has 47 dealerships throughout Yorkshire, Derbyshire, Lincolnshire and the North East and sells 19 of the world’s most respected brands such as Aston Martin, Audi, Bentley, BMW/Mini, Ferrari, Maserati, Mercedes-Benz, Porsche, Vauxhall and Volkswagen.

The group now employs a workforce of 1,800 people.