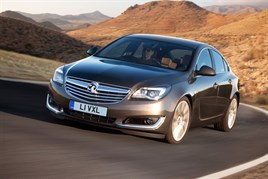 Dealers have opened their order books for the revised Vauxhall Insignia.

Vauxhall has also released the first official pictures of the new model range, which will debut at the Frankfurt Motor Show in September before first deliveries to customers in October.

Available as a five-door hatch, four-door saloon and estate, the new range now starts at £16,279, nearly £2,000 less than entry into the outgoing line-up.

An all-new infotainment system, incorporating Bluetooth-operated internet connectivity, an 8-inch touchscreen, and 3D navigation and voice control, is fully compatible with a driver’s smartphone. A DMB (Digital Media Broadcast) radio is now standard across the range.

The Insignia’s range has been simplified. There are now eight trims (down from 14 in the outgoing line-up), ranging from Design to Elite, with a mixture of new models that will appeal to both retail and fleet buyers.

"The new Insignia range embodies all that Vauxhall stands for: powerful design, innovative technology, terrific value and driving pleasure. The Insignia’s become a design classic in its class, and I’m confident that the new range will appeal to both existing customers as well as those who would never have considered buying a Vauxhall before."