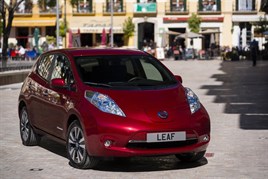 Nissan has reduced the prices on its Leaf down to £189 per month on a leasing scheme in order to boost interest in its all-electric vehicle.

The monthly payment is available for customers that buy an entry-level Leaf Visia on Nissan’s Flex battery lease scheme. Customers have put down a £4,000 contribution and will get an additional contribution of £1,600 from Nissan and £5,000 from the Government’s Plug-in Car Grant scheme.

The new Leaf has an improved potential battery range of 124 miles in comparison to the original model which had a range of 109 miles.

Nissan has reduced prices across its Leaf range for customers buying outright too. The entry-level Leaf Visia is now £20,990 after the £5,000 Plug-In Car Grant, while the higher specification Leaf Acenta is available for £23,490 and the range-topping Leaf is priced at £25,490.

Dealers have been largely skeptical of EV sales in the UK and whether they can take off as a mainstream proposition. Some dealers have told AM that the breaking point for EVs to take off will be a range of 200 miles and a significant improvement in access to fast charging facilities.

The cars eligible for the Plug-in Car Grant are: