The Society of Motor Manufacturers and Traders (SMMT) has published new figures showing that UK car manufacturing fell 8.4% in May compared to the same month a year ago.

However, as illurstated by this graph of car output in May (2007-2013),  the UK is still outperforming pre-recession levels. 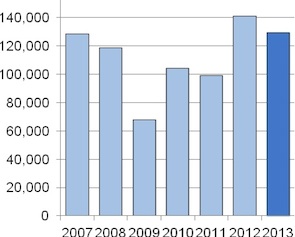 Output has remained flat during the first five months of 2013, falling just 0.6% to 632,804 units. Analysts suggest it could well rise over the full year.

Mike Baunton, SMMT interim chief executive, commented: “Despite output falling this month due to weak European demand, UK car manufacturing in May was above 2007 levels.

“Production levels are holding firm for the year so far, testament to the appeal of UK-built products around the world and significant growth in volumes built for the home market.

“While economic challenges abroad will impact on car output in the short-term, high-value investment by global automotive companies sets UK industry on course for prosperity in the long-term."