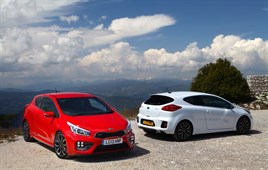 Kia has admitted its first high performance model, the ProCee'd GT, will be sold in very small numbers but claims nevertheless the model plays an important role.

Yaser Shabsogh, commercial director at Kia Motors UK, told AM the full-year sales expectations for the 201bhp hatchback are around 500 to 600 units.

"It's a very small market segment," he added. Neverthless the car plays an important role in adding a sense of fun and youthfulness to Kia's existing brand values, and in raising consumer perception of Kia.

As such, Shabsogh revealed the ProCee'd GT will feature in KMUK's brand marketing in the second half of 2013.

Kia said the ProCee'd GT is positioned as a comfortable, everyday performance hatchback and is not destined to rival ultra-dynamic models such as the Vauxhall Astra VXR or Renault Megane Renaultsport.