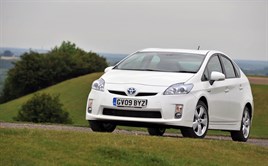 Toyota has recalled 5,000 third-generation Prius models in the UK built between March to October 2009 due to a potential brake problem.

The UK recall is part of a worldwide recall of 242,000 units due to a design fault on the brakes which can lead to cracks in the brake pressure accumulator under vibration from driving. This can lead to greater stopping distances when braking.

Toyota said no accidents have been reported by there have been 93 complaints from customers worldwide.

Toyota said: "The driver will become aware of the problem through a warning light illuminating on the dashboard.

"Should this occur, the vehicle should not be driven and owners should report the issue to their nearest Toyota Centre."

UK customers of affected will be contacted and the faulty part will be replaced for free and the job will take three hours.

While issuing a recall is a regular occurance for all manufacturers, Toyota's recall in 2009 of 1.3 million vehicles attracted mass media attention. However, dealers in the UK were praised with how customers were handled at the time.