Bentley proud of sales growth so far in 2013 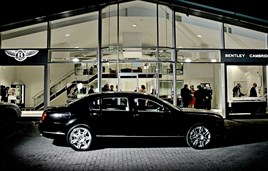 Crewe-based Bentley Motors has reported that global new car deliveries in the first half of 2013 were 9% up on the same period in 2012.

Growth in the luxury car maker's largest market, the US, was key, as was a strong showing in Europe. The business further enhanced its global presence with 14 new dealerships introduced in the first half of the year, a 13% expansion.

In the UK Bentley's registrations were 25% up year-on-year at 698 cars.

Kevin Rose, Bentley’s board member for sales, marketing and aftersales, said: "This success has been supported by the introduction of new models, with the Continental GT Speed and Continental GT Speed Convertible proving successful across multiple regions, while the existing GT W12, V8 and Mulsanne models maintain their strong performance.

“Bentley continues to post significant global sales growth and we are extremely confident we will sustain this success for the remaining months of 2013 as we see the full availability of our new Flying Spur in all markets.”

Bentley’s largest region, the Americas continued its impressive performance, with 1,282 cars delivered to customers, a 12% increase on the same period in 2012.

Bentleys continued to be sought after in the Middle East, with the Continental GT V8 (click here for AM's recent road test) performing strongly, resulting in the region delivering 394 cars to customers, a 28% growth. Significant gains were made in Asia Pacific, which saw 222 cars delivered to customers, a 53% increase.

Bentley’s Japanese market increased deliveries to customers to 96 cars, a rise of 28%.

In China, 817 cars were delivered, representing a 23% decrease over last year, as the market awaits the full availability of the new Flying Spur, a major car for this region. There was however growth for the Continental GT and Mulsanne model lines, reporting a 24% increase on last year.

A key emerging market for Bentley, Russia, posted growth figures on the back of network expansions introducing a new showroom in the key city, St. Petersburg, with the region delivering 110 cars to customers, a 4% increase.

This growth was furthered throughout Europe, posting a 22% growth to 740 cars, with the UK delivering 698 cars, representing a 25% increase on the first half of 2012.