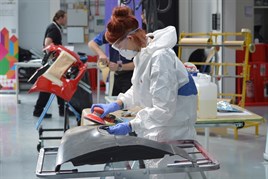 The Institute of the Motor Industry (IMI) has announced the finalists for this year’s SkillAuto competition.

The event aims to identify the UK’s best young automotive technicians and the final will be held at the UK Skills Show, at the NEC, in November.

Steve Nash, IMI chief executive, said: “Congratulations to all of the SkillAuto competitors that have made it through to the upcoming finals.  SkillAuto is a vital tool for placing the spotlight on the importance of skills in the motor industry.”