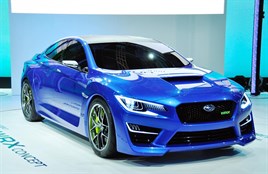 Subaru will consider the next-generation WRX saloon to go on sale in the UK if it can be imported at the right price for dealers.

The old WRX model is now sold out in the UK and the decision was taken earlier this year not to import further volumes.

The new-for-2014 Subaru WRX production car, while not confirmed for the UK market, is under consideration.

Changing market conditions has allowed Subaru UK to re-examine the feasibility of bringing the new car into Britain.

Paul Tunnicliffe, Subaru UK managing director, told AM: “Subaru has faced its darkest time as a franchise but we are now back in business.

“The weakening of the yen means we can import cars and price them much more competitively for the UK market.”

The WRX concept will make its European debut at the Frankfurt Motor Show on September 10.

Subaru has faced a particularly hard few years as the strength of the yen has meant UK parent company, IM Group has been unable to bring models over to the UK at a profitable price, which in turn sent market share and sales tumbling.