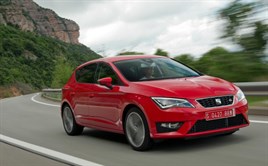 The Seat Leon has been named Car of the Year 2013 at the Auto Express New Car Awards.

Steve Fowler, Auto Express editor, said the Leon won the top award due to its combination of style, quality, kit and for the way it handles on the road.

He said: “You get all that at a bargain price, while running costs will be ultra-low, too.

“The Seat Leon has beaten some superb cars to be crowned Car of the Year – it’s that good.”

The award has been received the same week Seat launches the three-door Leon SC. The Leon range will also see a Leon ST estate model too.