The average UK dealers made a £25,000 profit in June, more than double the profit generated in June 2012, according to the latest profitability figures from ASE.

Overhead absorption is also slowly increasing, with the average dealer now at 56.6% in comparison to 56.1% a year ago. It is still off what ASE is calling the benchmark at 80%.

Mike Jones, ASE chairman said: “With strong registration levels for the quarter and a robust used vehicle market we expected the results for June 2013 to be strong and they did not disappoint.

“As a result we saw a further increase in rolling 12 month return on sales which has now risen to 1.33%. This equates to the average retailer making over £180,000 per site over the past 12 months, more than double the profit generated over the previous year.” 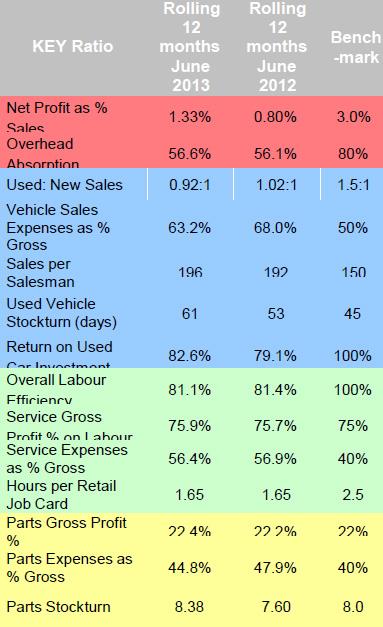 The strong new vehicle performance has led to a further drop in the key “new vehicle sales expenses as a percentage of gross” ratio which has now nearly fallen 5% over the past year.

Overall the gross profit generated by the vehicle sales department has increased by over £200,000 during this period.

Jones said: “By sweating the existing assets dealers have managed to deliver this by only adding £100,000 in costs.”

Used car performance remains a slight concern, with used car return on investment continuing to hover around 80%, a drop of 10% on the results achieved earlier in 2013.

Average stand- in-values are creeping up and stockturn is back above 60 days with stock vehicles once again suffering two book-drops before sale.

Jones said: “If we see the expected weakening of nearly new car prices over the second half of the year, some dealers will face significant write downs unless vehicles can be turned faster.

“Aftersales has continued its steady recovery with a further increase in overhead absorption. While the average dealer made significant profits during the second half of 2012 making it more of a challenge to continue the rise in the rolling 12 month result, current new car performance means that the good times look set to continue.”