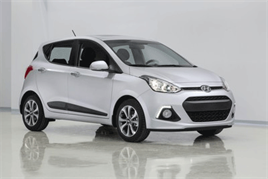 UK sales expectations for the new i10 (pictured) are making dealer nervous admits the brand's boss as it will no longer be sold as a 'value' car.

Almost a third of all European sales of the previous model were in British - and it's forecast the same will be achieved from January with the incoming model.

Tony Whitehorn, Hyundai UK chief executive, said there is some dealer anxiety, particularly as the new model is larger and better equipped than the outgoing car, factors which will inevitably make it more expensive than the current car, which starts at £8,300.

"It will cost more money," he said.

The new i10 will be built in Turkey whereas the old one came from India, and Whitehorn says Hyundai will go out to emphasise its European character.

"A lot of people still see us as a Korean company, but Hyundai is actually very Euro-centric these days," he said.

"When the new i10 arrives, 90% of the cars we sell in Europe will be made in Europe. The Koreans recognise that Europe is an iconic market and to be recognised as a truly global company you have to be successful in Europe."

The UK's importance for sales of the previous i10 is purely down to the scrappage schemes which followed the 2008 banking collapse, Whitehorn acknowledged.

"The secrets for success in a situation like that are publicity and stock. Before scrappage I was ordering about 1,000 a month.

"But in one month in the build-up to scrappage I ordered 7,000. It was a risk, but in the three weeks between the Budget and the start of scrappage I sold 4,000. It got us onto people's shopping lists and we haven't looked back. This year  we will sell 22,000 out of our total UK volume of around 80,000."