Dealers made a £6,000 profit on average in July in comparison to £1,000 last year and return on sale is now at 1.35%, according to the latest dealer profitability figures from ASE.

The results continue the pattern of outperformance set during the first half of 2013.

However, while profits are improving ASE is concerned about the level of self-registration activity present in the market.

Average stock holding has been creeping steadily upwards over the past year, with dealers now holding £50,000 more stock than they were at the end of July 2012. 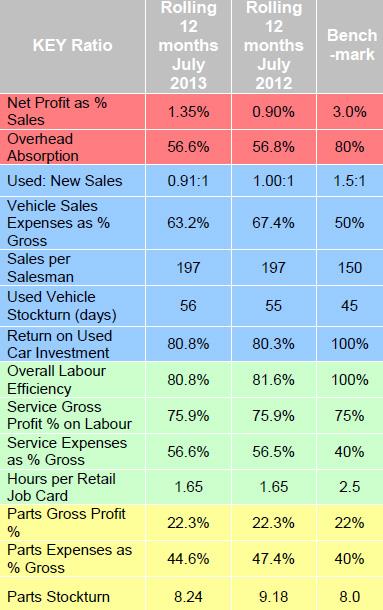 Over this time ASE has also seen a 6% increase in the average stand in value indicating a greater proportion of nearly new and self-registered vehicles within the stock mix.

Mike Jones, ASE chairman, said: “Anecdotally, the increase in value is partially a result of the increased availability of nearly new cars; however there has also been some significant self-registration activity which is distorting stocks.

“Continuing the growth in record profitability through the second half of 2013 will be a challenge as some of the comparative profits from 2012 were very healthy.

“There are certainly going to be plenty of cars registered – the key question is whether dealers are going to be able to sell them profitably.”
The majority of the profit in July was generated by the vehicle sales department as a result of the improvement in the expenses as a percentage of gross profit ratio.

Dealer focus remains firmly on new vehicle sales, a situation which ASE expects to continue in the second half of 2013 as dealers wrestle with the challenge of increased sales targets.

Used vehicle return on investment has dipped slightly to 80% and overhead absorption is slightly below where it was in July 2012 at 56.6%, still a way off the benchmark of 80%.