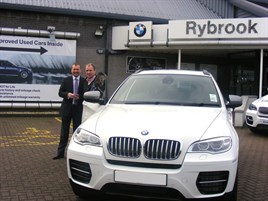 Back will represent the company at events over the next year.

Henry Whale, Rybrook managing director, said: “Neil is a perfect fit for our Group, he is hugely respected in the rugby world and rugby is a key target audience for our brands. We look forward to working with him to further establish ourselves in this market over the coming year."

Back played for Leicester Tigers 338 times scoring a club record 125 tries. During his international career, he played in three World Cups, went on three Lions Tours, gained 66 caps for England, captaining them four times and was part of the 2003 World Cup & Lions 1997 Series winning sides.

Following his retirement Back progressed into coaching, beginning with five years for Leicester before moving on to Leeds for three seasons, where he was head coach as they gained promotion to the Premiership.