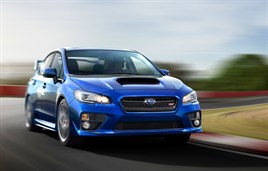 Subaru UK has confirmed it will be importing the next Impreza WRX STI in May in limited numbers, priced from £28,995.

IM Group, the importer for Subaru in the UK, previously announced less than a year ago that the last WRX STI has been sold after problems with the Japanese exchange rate meant it could not be imported at an acceptable price for customers.

However, the situation with the Japanese yen has improved, which means IM Group can now bring back the iconic model with a £4,000 price cut over the previous model.

The new WRX STI is powered by a 2.5-litre turbo-charged Subaru Boxer four-pot engine, which in STI guise, produces 305hp and 290lb/ft of torque. The six-speed gearbox has been reinforced and now has a shorter throw shift feel.

Subaru UK will be launching a dedicated area on its website where prospective owners can register their interest in the new WRX STI.

Paul Tunnicliffe, Subaru UK managing director, said: “We wanted to acknowledge the following the WRX STI has, and while both the market and the brand in the UK has changed in recent years, the WRX STI remains a demonstration of Subaru’s technical know-how.

“The new model will only be available in limited numbers when it goes on sale in summer nevertheless we were keen to give our performance car fans the opportunity to try it here for  themselves.”