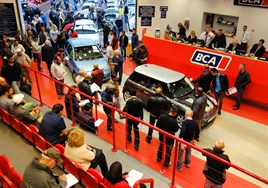 Average used car values at BCA rose sharply last year as the combination of buyer demand and an ongoing shortage of retail quality stock increased competition for the vehicles on offer.

It is the highest annual figure on record. Average age and mileage declined to 61 months and 56,400 miles respectively, reversing the trend of the previous three years which had seen both age and mileage creep up.

Average performance against CAP Clean climbed by nearly half a point to 96.87%.

Looking at monthly values during 2013, the peak month for value was December, where the combination of a short trading month and reduced supply resulted in record values. April posted the lowest monthly value in the annual cycle for the second year running, the effect of the post-Easter decline depressing prices.

“Demand rarely faltered throughout the year, even into the traditionally quieter summer months and the second half of 2013 was particularly strong. There can be little doubt that news of the improving economic conditions in the UK has put some confidence into the marketplace.”

Henstock said the September plate change resulted in a noticeable step-up in buyer activity which carried on through the autumn and early winter.

He said: “Looking ahead, our view is that the overall shortage of used product and the issues of supply versus demand will see a continuation of high conversions and higher selling prices in 2014, meaning we are going to see more of what is best described as a “sellers’ market”.

“However, this does not mean sellers have carte blanche to ignore remarketing best practice. Even when demand is high, it is important to evaluate and appraise stock sensibly. The most successful vendors recognise that condition and grade have a critical role to play in valuing vehicles, rather than just using the price guides in isolation.”

Dealer Part-Exchange values rose by £712 to £3,691, a substantial 23.9% improvement over the average values recorded in 2012. Both average age and mileage rose slightly over the year, while performance against CAP Clean improved by nearly three points to 95.35%.

Performance against CAP Clean was equivalent to 99.94% over the year. The shortage of retail quality vehicles focused attention on the limited volume of young stock reaching the wholesale sector and contributed to the stronger price performance in 2013. As always, the low volumes of nearly-new cars mean that model mix also has a significant role to play on the average values achieved.