Volvo focuses dealers to sell on PCPs, rather than cash discounts 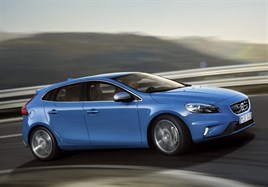 Volvo UK focussed its dealer network on selling PCPs in 2013 rather than large cash discounts and sales director Jon Wakefield is expecting the finance product to boost volumes further this year.

Volvo’s order take for January is running 58% ahead of January last year and comes off the back of 3% growth in 2013.

Wakefield said: "Growth last year was a little down compared with the rest of the industry but it was 8% ahead of the previous year and we had the run out of models including C30.

“We are growing faster now after refocussing dealers on selling cars through PCPs rather than through large cash discounts. This is the way the market has been moving on the retail side.”

Volvo sales in the UK last year totalled 32,666 and Wakefield is looking to hit 35,000 in 2014 with the push on PCPs expected to boost the retail side of the business which currently accounts for around 35%.

V40 was the strongest seller last year and looks to be doing the same this year with the C-segment remaining strong as people downsize, however the XC60 has also performed strongly "and is not that far behind", he added.

Despite being on sale for 11 years, Wakefield said the sales of Volvo's XC90 SUV still hold up well, with around 2,500 leaving the showrooms last year and he expects a similar number in 2014 despite the fact that production will stop in the summer as the factory prepares for the new generation model due early 2015.

Volvo is owned by Chinese carmarker Geely and the relationship could mean a new small car. Volvo and Geely are said to be developing a subcompact vehicle platform in a joint Swedish research and development centre which the partners opened last year.

Reports say the small model would be used exclusively by Geely to compete against models like the Ford Fiesta, Volkswagen Polo and Toyota Yaris.

A Volvo version has not been ruled out.

Wakefield added: "Looking at the growth in the market segment a sub-compact would be welcome as long as it comes with all that is Volvo in terms of class leading safety, environmental efficiency and economy - but it's certainly not in my field of vision now."