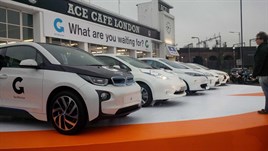 In the last three years almost 20 electric and plug-in cars and vans have been launched into the UK market such as the BMW i3, Nissan LEAF and Vauxhall Ampera - and the Government wants to make it more convenient to own one.

Clegg said: “Electric cars are one of the most promising of our green industries and we want to secure the UK’s position as a global leader in both the production and adoption of these vehicles.

“The extremely low running costs of these cars help drivers save money and we are allocating more than £9 million to boost chargepoints across the country to help drivers to go green.”

The Government has now signed off £5.8m investment for more than 140 new rapid chargepoints that can fully recharge a ULEV in 30 minutes. These will go into areas with a lack of chargepoints in order to create a UK-wide network of 500 rapid points.

A further £600,000 will be spent on 80 points in train station car parks while grants worth £2.9m have be awarded to public sector organisations, including NHS trusts, the Ministry of Defence and fire services, to install 450 chargepoints on their own land for staff, business fleets and visitors.

The Government has also previously committed £5m to invest in the introduction of electric vehicles into its own fleets this year.T

he collaborative ‘Go Ultra Low’ initiative is the first of its kind bringing together leading manufacturers with the Department of Transport, the Office for Low Emission Vehicles and The Society of Motor Manufacturers and Traders (SMMT).

The scheme will be promoted with national print advertising, radio slots, celebrity ambassadors and fleet partnerships throughout 2014.