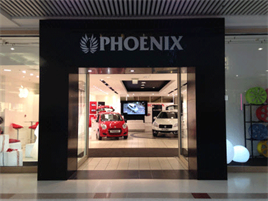 Phoenix Car Company developed a pop up car store in Glasgow’s busiest shopping centre for the seven weeks of the year in and around Christmas.

But instead of working to increase showroom footfall, Phoenix took the showroom to the footfall.

Phoenix took over two existing units spread over two floors that was previously home to a clothing store in the Braehead Store.
Complete with merchandising, staffed on-site until midnight the team worked to change stock and attractions to represent all brands and services.

Phoenix managing director John McGuire said: “The opportunity to welcome some of the many people visiting the Apple store, which was opposite our pop-up store, let alone the many thousands of other shoppers, was one we couldn’t resist. It was also a chance to pit our wits against the very many retailers and their merchandising expertise, as well.

“With our normal energy, I’m proud to say we stepped up to the plate and delivered something we can be proud of and which has also generated significant interest in our cars and aftersales services. I’m glad to say that some people also bought cars on-site."

The business seized the opportunity to speak to both prospective and existing customers in a different setting.

The top floor unit was transformed into a Honda brand centre.

On display were scooters, children’s motorbikes, motorcycles, lawn mowers and of a range of Honda cars, plus a Honda S2000 sports car simulator.

In the lower level, the wider portfolio of Phoenix brands was showcased with the all-new Hyundai i10 receiving its official Phoenix launch in the store.

Marketing effort included appearances from special guests from the Celtic and Glasgow Rocks basketball teams, competitions running including ‘win a car for a year’ and some exclusive discounts.

McGuire said: “It was a lot of effort and a lot of fun. It galvanised the team, challenged our creativity, raised our profile and it delivered sales, appointments and aftersales work, which we doubt we would have achieved if we had waited for those Christmas shoppers to come to us. By every measure it was a very valuable campaign.”