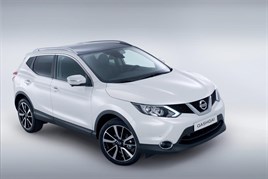 The Nissan Qashqai has been named the What Car? Car of the Year 2014 at the 37th annual event.

This is the first time that Nissan has won the headline award. The British-built Qashqai was also named best small SUV.

What Car? editor-in-chief Chas Hallett said: “The all-new Nissan Qashqai brings excellence and polish to a class of cars that is brimming with talent and tempting buys. The Qashqai delivers low costs and first-class levels of comfort, refinement, space and safety.

“Nissan has thought of every last detail, and this complete approach is why the Qashqai is What Car?’s Car of the Year. The Nissan team should be justifiably proud of their achievement.”

Nissan Motor GB managing director Jim Wright said: “A huge amount of effort has gone into the design and engineering of the new car, and we’re all extremely excited about creating the template for the second-generation crossover."

BMW were awarded two trophies; the 435i won best coupé and the new i3 was named best green car. Audi also had a double victory, with the A3 Saloon winning the best executive car and the A3 Cabriolet the best open-top car.

Two awards went to Ford for the Fiesta; the 1.0T 100 Ecoboost Zetec 5dr was declared the best small car and the ST-2 the best hot hatch.

Sports car of the year went to the Porsche Boxster 2.7, while the MPV award went to the Citroën Grand C4 Picasso.

The Skoda Octavia was given the family car award and the estate car trophy went to Volkswagen for the VW Golf Estate 1.6 TDI SE Bluemotion Tech.

The all-new Nissan X-Trail, which goes on sale this summer, was awarded the most exciting car 2014 by What Car? readers.

Andrew Golby, What Car? brand director, said: "Whether it’s a new or used car accolade or an association via our lead-generating Connect service or approved used programme, the benefit of our endorsement has been proven to increase footfall, interest and sales penetration.”

In addition to the brand association benefits of What Car?, dealers can now boost revenue through What Car? Connect lead generation service. Using data from the 2.4 million unique monthly visitors to Whatcar.com, the service is supported by a call centre capable of 50,000 calls a month to users in the market for a new car.

By July last year the Audi A3 Sporback (the 2013 car of the year) was generating the highest number of qualified leads fed through to dealers via What Car? Connect.