Are you ready to register for full FCA compliance? 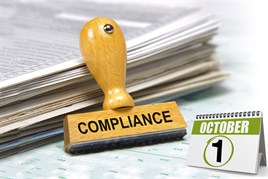 From October 1, dealers need to be ready to register for full authorisation with the Financial Conduct Authority (FCA). “The temperature is certainly rising in terms of dealer concerns about the requirements for FCA compliance,” said Shaun Harris, sales director at Codeweavers.

The FCA, which replaced the Office of Fair Trading, was tasked by Parliament to ensure consumers taking loans are treated fairly. Any dealer that has failed to apply since April 1 for interim permission faces stiff financial penalties if they continue to provide consumer credit after next month. By mid-September, about 9,900 dealers had interim permission.

From October, the FCA will direct dealers and other businesses with interim permission to apply for full authorisation before April 1, 2016. Most have been given ‘landing slots’ sometime in the next six months.

While suppliers in the motor retail finance sector are optimistic that the process will benefit dealers as well as consumers, some dealers are concerned about the uncertainty  surrounding the FCA.

Martin Hill, managing director at Frontline Solutions, said some franchised dealers who had received assistance on compliance from manufacturers were already used to working within strict brand guidelines.

“This rigour can assist with the demands of consumer credit regulation, especially with regard to the FCA application process,” he said.

“However, any dealer (franchised or not) that decided not to become authorised for general insurance in 2005 will find the new finance regime challenging. Regulation by a financial services watchdog can be onerous, to say the least.”

Hill said used car dealers had traditionally not been subject to the demands of gaining a franchise. “Some would say this is the reason they chose not to go along this route,” he added. “Regardless of franchised status or not, the regulator sees only a consumer credit intermediary – pure and simple.”

He said this meant that both franchised and non-franchised dealers would need to complete the same application form for FCA regulation – “the regime has been a great leveller in this regard”. Dealers would be given ‘landing slots’ in Q4 2014 or Q1 2015 so they could all be processed together.

Hill believed some dealers were struggling to prepare applications for full compliance because the process was intense.

“The FCA is asking some dealers to outline processes and systems that many of them do not have and are struggling to create,” he said.

Register your attendance and submit questions