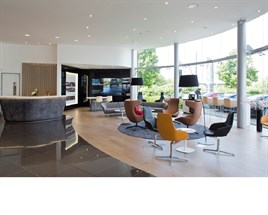 Lexus has started to roll out its first new corporate identity standards in six years following a pilot scheme at Inchcape’s Lexus dealership in Guildford.

The new look showrooms will feature four large monitors which customers can use to configure their cars and Lexus will also be one of the first companies in the UK to roll out use of Oculus Rift virtual reality headsets to give customers test drives and the opportunity to take a closer look at how their car will look with specific trim options.

Richard Balshaw, Lexus GB managing director, is expecting the entire network to have updated to the new look by the end of 2015.

Lexus has been through three corporate identity refreshes with its dealer network in the UK with the first pre-1998 when Lexus was tied with Toyota dealerships, then 2000 when it broke out on its own and then 2008.

Lexus sold 11,000 new cars last year and the launch of its new NX crossover is expected to add 3,700 registrations in a full year.

The new look showroom is in keeping with Lexus’ latest model design and coincides with the launch of its new NX crossover model, with 80% of sales expected to be conquest, also lowering the average age of its customer demographic.

Balshaw told AM: “Things like the virtual reality headset are a talking piece but it links together what we’re trying to do to link the digital world with the physical space.

“Customers can also save their model configurations, including finance when they’re browsing on our website and then we can give them a QR code to download. They can bring the QR code into the showroom and continue that online experience seamlessly into the showroom.”

Dealers must fund the upgrades to showrooms themselves but Balshaw said funding will be available.

He admitted that margins were under pressure and reiterated that the franchise needed to get back to at least 15,000 sales again, but would not comment on the average return on sales for the UK network.

Lexus is known for leading customer satisfaction surveys and Balshaw said the brand was not looking at making large changes like mandating extended opening hours for servicing in the future.

However, Lexus is also launching a new five-day training programme, which dealers can do in blocks, which focuses on customer service and the idea of striving for small improvements each day.

Managers from each department of the dealership will attend the training and Balshaw hopes they will pass on what they have learnt to their teams back at the dealership.

One example given was dealers paying attention to what smartphone a customer is uses. The NX uses a wireless inductive charging pad in between the front seats but only newer handsets are compatible with the technology.

Dealers selling the NX will notice or ask what phone the customer has and if they buy an NX, they will include an inductive charge sleeve, which will work with any phone, for free.

Balshaw said: “If we can grow to 20,000 units we will still be small enough that we can continue to take the time to deliver exceptional customer service across our dealerships.”