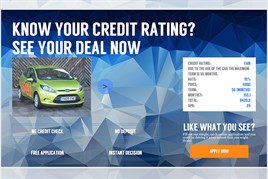 The company, which entered the sub-prime sector seven years ago, says it invested “heavily” in the revamp, but would not disclose the cost. All divisions of the group, headed by Richard Teatum, are based at Thorne, near Doncaster.

Mark Zavagno, Stoneacre head of digital sales, said: “Considerable growth in the UK’s sub-prime sector, which includes applications we have received over the past 18 months, has been the main driving force in our decision to lend our own money through Stoneacre Financial Services.”

Zavagno said the introduction of online tools such as ‘risk navigator’ and ‘payment box’ had driven a substantial growth in leads generated.

“Leads now total 6,000 a month, which was a key factor in our decision to relaunch Clearway Car Finance,” said Zavagno.

“We carry out a ‘soft search’ when a customer makes an online finance application. This doesn’t show up on a credit report and won’t negatively affect their credit rating. We use a piece of risk navigation software which helps match an individual against a specific finance product.

“Before paying out, the lender will complete their own full credit check.”