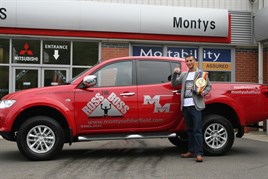 Monty’s Mitsubishi in Sheffield is sponsoring Commonwealth bantamweight champion Ross ‘The Boss’ Burkinshaw by lending him an L200 Trojan.

The sponsorship, which also includes putting the Monty’s brand on Ross’s kit and casual clothing, means Monty’s and Mitsubishi are being put firmly in the spotlight among local businesses, the community and the boxing fraternity.

Ross, 28, is a former squaddie and was the first serving soldier allowed to become a professional boxer while in the Army.

Ross, who won the English championship in 2009 and trains at Coldwell Fitness in Rotherham, said: “I’m absolutely over the moon with the Trojan. It’s a cracking vehicle. I love driving it. It gets me noticed straight away! It’s great to be working hand in hand with Monty’s, too, because it’s the biggest dealership in the area.”

The Trojan is a tough workhorse, so it’s the ideal vehicle for the gritty, determined boxer.

Business centre manager at the dealership, Rikki Brownhill, said: “It’s wonderful that Ross has won the title, and we’ve been very lucky to get him into a sponsorship deal, because he’s very popular locally.

“This should be great for both him and us, as the Trojan has got our name on it, so it’ll be great exposure. We’re looking forward to this arrangement lasting a long time.”