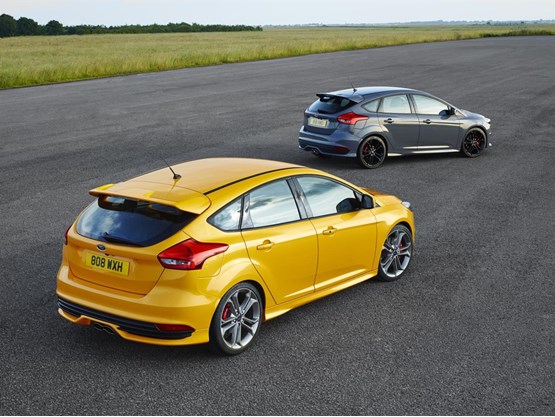 The all-new Ford Focus ST is now on sale and is available to buy from £22,195, with first deliveries expected early next year.

The new Focus ST features sportier and more aggressive styling than the previous generation, with a lower, wider stance. The sports bodykit includes body coloured side skirts and diffuser elements either side of the exhaust, and a rear roof spoiler optimised for aerodynamic performance.

Engine options include the 246bhp 2.0-litre EcoBoost petrol with a maximum speed of 154mph and a 2.0-litre 182bhp TDCi diesel which emits 110g/km CO2. Both engines use a six-speed manual transmission with short-shift and auto-start-stop is included for the first time.

Tech specification includes active city stop collision avoidance system – which operates up to 31mph, cross traffic alert and a lane keeping aid which applies steering torque to guide the Focus ST back in to lane if drifting is detected.

“It is now even more enjoyable and rewarding to drive and with the choice of diesel power for the first time, the new Focus ST is in a class of its own – The model has proven very popular with Ford’s sporty customers and the new model takes that to an even more striking and dramatic level”.