Audi upgrades A1 spec and engines 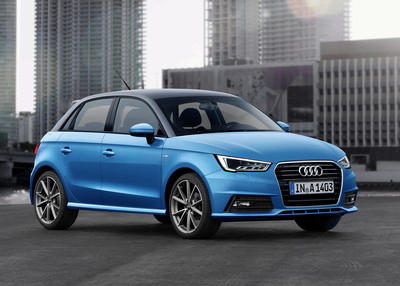 Audi has updated its A1 and A1 Sportback ranges, including spec upgrades and the addition of a new three-cylinder petrol.

The company claims the changes to the model, which was originally launched in 2010, improve fuel economy by up to eight per cent and trim CO2 output to as little as 92g/km.

Powering the first UK-bound versions of these new models will be a choice of two TFSI petrol engines or a TDI diesel which are now compliant with the latest EU6 emissions regulations and which offer more power, improved economy and in the majority of cases lower emissions than their predecessors.

The petrol duo comprises two versions of the turbocharged 1.4-litre TFSI – the ‘standard’ unit with power up from 122PS to 125PS and CO2 down from 124g/km to 115g and the ‘Cylinder-on-Demand’ alternative now offering 150PS with CO2 output of 112g/km.

In the spring of 2015 a new turbocharged and directly injected petrol engine - the first with a three-cylinder configuration ever to feature in the Audi range – will become available in the UK, and will come closer than ever to achieving TDI-style frugality.

Provisional data for the A1 1.0 TFSI indicates that it will be capable of returning at least 60mpg with CO2 emissions of 99g/km, yet with 95PS – a 6PS increase over the 1.2 TFSI that it replaces – will also deliver suitably peppy performance.

Features common to all versions include alloy wheels, remote central locking, air conditioning, electric front windows and mirrors and a six-speaker single CD audio system with auxiliary iPod connection linked to a 6.5-inch retractable display. A secondary collision brake assist system also now joins this list for the latest range, which can initiate automatic braking to reduce the risks of skidding and additional collisions during an accident.