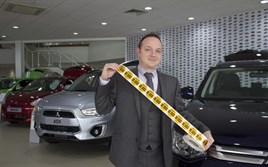 Lings Mitsubishi in Lowestoft is backing a campaign to keep children safe on the roads this winter.

The dealership, which opened at Lings Wharf, Riverside Road, in August has joined forces with The Beach radio station for the Be Seen, Be Safe campaign.

20,000 reflective stickers with the campaign’s slogan on have been printed and are being handed out to local schools and youth groups for children to stick on their coats, bags and bikes.

Staff from the dealership will also be giving the stickers away at Market Gates shopping centre in Great Yarmouth this week, until November 21st.

Sales manager at the dealership Jonathan Potts said: “The idea of the campaign is to keep children safe as they’re walking or cycling on those dark journeys in the morning and evening.

“We’re really pleased to be part of it and we hope it makes a difference during the winter months. The campaign will give parents peace of mind, knowing their children are that bit safer and I’m sure the youngsters will love the stickers.”