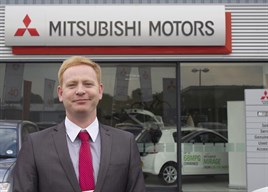 Andy Jackman (pictured) has been appointed as the new general manager of Melksham Mitsubishi, following a restructure to deal with an increase in sales.

Jackman, who runs the award-winning Swindon Mitsubishi dealership, will take over the running of the Melksham branch on Paddington Drive, Bridgemead, as well – both of which are owned by CCR Mitsubishi.

James Austen, who was previously Brand Manager at Melksham, has been appointed CCR’s Group Fleet Manager to handle the increased interest from business users in Mitsubishi.

Jackman said: “This is a really exciting opportunity and we’re looking forward to replicating the success we have enjoyed in Swindon at our Melksham branch. It’s great to have responsibility for two dealerships and I’m looking forward to this new challenge.”

Managing director of CCR Mitsubishi Tim Bagnall said: “This is an exciting time for Mitsubishi and we’ve made these changes so that we can make the most out of the great opportunity we have.

The Outlander PHEV is proving a big hit with fleet users so it’s important to have James in his new role. Andy has done extremely well at Swindon and we are sure he will help business grow at our Melksham branch.”

The sales success of the Outlander PHEV is having a positive effect on other Mitsubishi models. The company’s overall sales were up 94% in September compared to the same time last year, according to the latest figures from the Society of Motor Manufacturers and Traders (SMMT).