This is the best September performance since the introduction of the twice-yearly release of new registration plates in 2001.

The percentage of private new car sales financed by FLA members in the 12 months to September 2014 increased to 75.8%, a record high.

The consumer used car finance market also saw growth in September, with volumes and values up by 15% and 23% respectively, compared with the same month last year.

Paul Harrison, head of motor finance at the FLA, said: “More than £3.2 billion was provided by FLA members to help businesses and households fund car purchases in September. 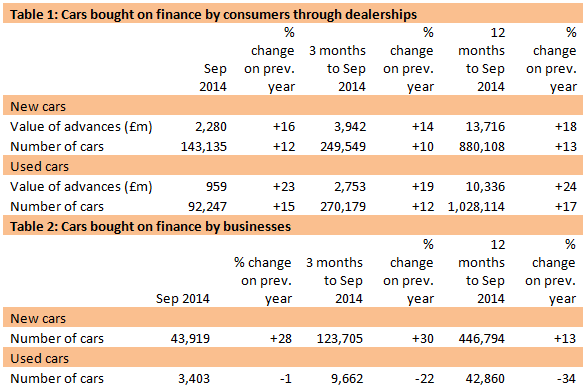 Looking at consumer finance new business overall in September, there was a 12% surge compared with the same month last year.

The FLA’s share of the UK consumer credit market increased to 34% in the 12 months to September 2014.

Credit cards and personal loans new business together grew by 6% compared with September 2013. Retail store and online credit was up by 8% in the same period, and point-of-sale finance was up by 18%. Second charge mortgage new business grew 41% by value and 17% by volume.

In 2013 FLA members provided £89.0 billion of new finance to UK businesses and households. £66.6 billion of this was in the form of consumer credit, almost a third of all unsecured lending in the UK. And £27.6 billion of it supported the purchase of new and used cars, including almost three-quarters of private new car registrations.