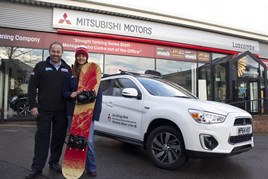 Team GB athlete Zoe Gillings-Brier has picked up the keys to a new Mitsubishi ASX after becoming an ambassador for the brand.

The 29-year-old, who has competed at three Olympics, becomes the latest brand ambassador for Mitsubishi, along with the likes of Olympic equestrian Mary King MBE and Welsh and Gloucester rugby stars James Hook and Richard Hibbard.

Gillings-Brier said: “I'm really excited to join the Mitsubishi family; the ASX is a fantastic Olympic training vehicle, due to its versatility. I’ll use it in the mountains and in the city, it is 4wd, it has a fantastic safety record, it’s the perfect size for me and I just love driving it!”

Mitsubishi’s new brand ambassador has a busy schedule and the ASX will come in handy when travelling around Europe for training and competitions as she bids to reach the 2018 Olympics in Pyeongchang.

Sales of the ASX have increased by 356% in October, according to the Society of Motor Manufacturers and Traders (SMMT).

Managing director of Mitsubishi Motors Lance Bradley said: “We’re delighted Zoe has become the latest brand ambassador to join the Mitsubishi family. She is a fantastic talent and the smart, efficient, versatile ASX is the perfect match for her active lifestyle.”