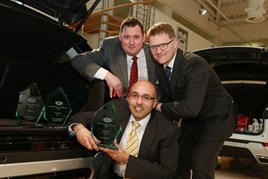 Vertu Motors has been recognised for excellence after winning three out of four accolades at the Land Rover Awards.

Farnell, which became part of Vertu Motors plc last summer, was recognised as amongst the best Land Rover dealers in the UK, with Vertu taking the top title – Dealer Group of the Year – which was presented for the first time this year.

As well as the group winning the top award, Farnell Land Rover in Leeds triumphed over 130 dealerships to be named Dealer of the Year for the second year running.

The dealership was also awarded Service Centre of the Year, winning this title for the third consecutive year at the ceremony on Saturday night, which took place at the Royal Courts of Justice in London.

Vertu's Leeds and Bradford Land Rover dealerships featured in the top ten for aftersales dealer of the year.

Vertu acquired Farnell Land Rover, which has been operating dealerships in Leeds, Bradford and Guiseley for more than 65 years, with a £31m investment in May last year.

Robert Forrester, chief executive of Vertu Motors, said: “We are absolutely delighted to have been recognised nationally at such a prestigious awards ceremony. It’s a resounding endorsement from Jaguar Land Rover, and one which undoubtedly gives us a great platform for further growth and success.

" When we acquired Farnell last year, our aim was to build on the success the dealerships were already experiencing and, thanks to a great team with expert leadership, this has already been achieved, with fantastic sales over the past nine months.

“Colleagues at Farnell, in common with all Vertu Motors dealerships, always make customer satisfaction their number one priority. As an established Yorkshire brand with a long-standing reputation for excellence, it has been fantastic to see team members step up to not only maintain, but to surpass these standards of quality.

"I am immensely proud of the teams at all the dealerships, whose talent, commitment and hard work has been acknowledged with these awards.”