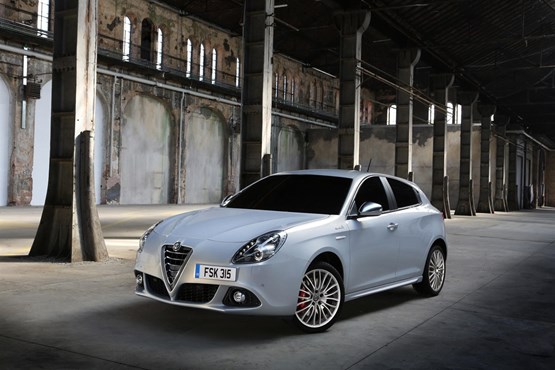 Alfa Romeo has updated its Giulietta with new styling details, engines and technology for 2014.

Interior changes include a redesigned dashboard with higher quality materials, a standard Uconnect multimedia system and repositioned USB and aux ports on the centre console.

Every engine in the Giulietta range benefits from improved efficiency and lower emissions.

The new Distinctive trim level, which replaces Lusso, benefits from new 16-inch turbine-design alloy wheels and chrome-effect mirrors, while the interior is upgraded with new upholstery; new trim inserts and a cooled glove-box as part of its 2014 revisions.

The new Sportiva Nav trim level benefits from the standard features of the outgoing Sportiva model - its sports suspension; 18-inch alloy wheels in a dark titanium finish; red Brembo brake callipers with uprated discs and unique badging - but is now fitted with a sports steering wheel with white stitching; leather and Alcantara upholstery; front parking sensors and, as the name suggests, a new 6.5-inch Uconnect™ satellite navigation system, with TMS, all as standard.

A range-topping 2.0 JTDM-2 175hp engine, now with TCT as standard, will be available in both Exclusive and Sportiva Nav trims in the coming months, while details of a new sporting flagship for the Giulietta range will be announced at the 2014 Geneva Motor Show in early March.