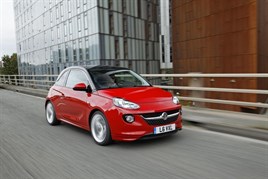 Vauxhall is increasing its Adam city car sales expectations by 62% from 8,000 units to 13,000 units after a “cautious” start.

Stuart Harris, Vauxhall's head of carline, product and brand, said original sales expectations for the new model were cautious as the brand was entering into an unknown area of the market with a more premium focussed city car product. Vauxhall is also expanding its city car line-up with the new Adam Rocks.

The increase in Adam sales will help fuel Vauxhall’s ambition to overtake Ford as the biggest volume player in the UK by 2016.

Vauxhall has five new models due over the next couple of years, including a new Corsa by the end of this year and new UK-built Astra next year. These will be key volume drivers for Vauxhall if it wants to overtake Ford.

The UK is the biggest European market for Corsa with sales of around 83,000 a year, well ahead of second place Germany on 50,000 and a healthy base on which to launch the new model.

Reinforcing its optimism, Vauxhall says that sales of Meriva, which has just had a facelift and gets the all-new 1.6-litre ‘Whisper' diesel engine and ‘soft' change manual gearbox, were up 26% last month compared to January last year.

New Astra, built at Ellesmere Port, will get far more UK-sourced content, rising from the current model's 10% to more than 20%. The company says that sourcing components in sterling rather than euro will provide a competitive edge when it comes to selling cars to UK buyers.

Vauxhall finished 2013 with 259,444 cars registered in comparison to Ford’s market leading position of 310,865 units. Vauxhall will have to boost passenger car sales by over 20% by 2016 in order to overtake Ford.

Do you think Vauxhall has a chance of overtaking Ford as the UK’s most popular brand? Please leave your comments in the box below.