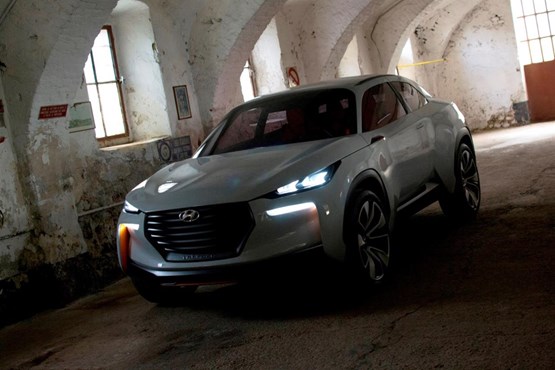 Hyundai has revealed its new Intrado crossover concept as the first model to be designed by under the direction of Peter Schreyer, who became president and chief design officer of Hyundai Motor Group in January 2013.

Schreyer has been tasked with making future Hyundai models more distinctive from his work with Kia and the Intrado hints at the direction future cars in the Hyundai range will look.

The new concept also shows off new vehicle technologies as well as the next-generation of the Hyundai’s fuel cell powertrain.

The Intrado takes its name from the underside of an aircraft’s wing – the area that creates.

The concept is powered by a next-generation hydrogen fuel-cell powertrain that uses a lithium-ion 36 kWh battery. The car can be refuelled in “a few minutes” and has a range of 370 miles.

Schreyer said: “Effortless and sensual, Intrado reflects the open-mindedness and constant renewal of the Hyundai brand. It also shows that Hyundai wants its customers to rediscover the joy and freedom that should be associated with personal mobility. That’s why this car has such purity of purpose – it’s logical, lovable and liveable.”

The Intrado was styled and engineered primarily at Hyundai Motor European R&D centre in Rüsselsheim, Germany.

He said: “In line with its promise of a motoring future that is more relevant to users’ lifestyles, we have given Intrado a distinctive exterior and interior shape, formed from the lightweight frame that incorporates only what is necessary.

“The exterior is defined by a simple yet sporty profile which displays the latest interpretation of fluidic sculpture, while the interior shows how minimal ornamentation will perfectly fit into the varied lifestyles of the millennial generation.”